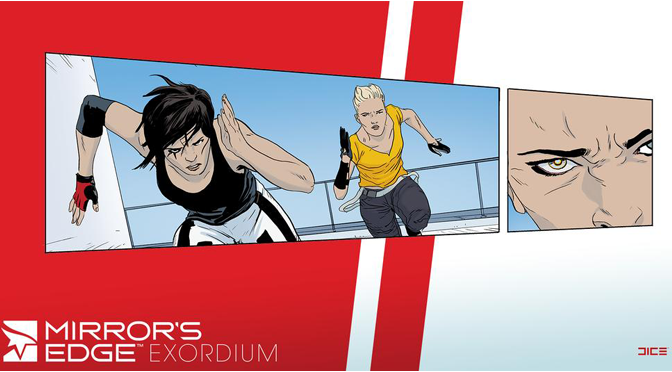 “Mirror’s Edge – Exordium” is based on a first-person perspective action/free-running game developed by EA Dice and published by Electronic Arts for various gaming platforms in 2007. The game focuses on a futuristic dystopian society in which an unnamed city is ruled by a totalitarian regime. The regime makes life comfortable for its citizens and keeps crime controlled, at the cost of controlling all aspects of the civilian population’s lives – from monitoring all communication, to controlling the media, and even banning leisurely activities such as smoking and alcohol.

The fact that it is based on a popular source material from a different medium is the biggest drawback of the “Mirror’s Edge” comic. It relies on the reader being familiar about the game. It is very difficult to follow a plot when dropped into the middle of a story without any background information.

But the writer, Christofer Emgard, does progressively reveal enough of the necessary background along the way, so that the unfamiliar reader will be up to speed by the time he or she gets to the third issue.

The story follows a character named Faith, a young female “runner”. “Runner”, in the story, is what they call couriers who traverse the rooftops of Glass city ferrying messages, stealing valuable items, or just spying on different factions. This is all done while evading the establishment’s various enforcers and drones.

Faith, as revealed in the story, is an orphan raised by an older and retired runner named Noah, who earned a reputation for his exploits in his more youthful days. Faith shows a lot of potential and is considered as one of the best runners in the area, despite not being “beatlinked.” There is unhelpfully no mention of what being “beatlinked” is, and even the most attentive reader will have trouble inferring its meaning just from the pages.

During a routine run that required Faith to lure enforcers away from her fellow runners, she inadvertently leads the pursuers to an ongoing illegal transaction between what we can assume are criminals or syndicates, getting her the attention of the city’s most notorious crime lord, Dogen.

Dogen, angered at the attention Faith has brought to him, directs his goons to abduct the protagonist and bring her to his office, with the intention of summarily executing the runner to serve as an example to others. But Faith manages to gain the crime lord’s interest after revealing the name of her biological parents, who both died when she was young. This sets off a rough business relationship between the perfectionist Dogen and Faith, who seeks appreciation from a father figure. Dogen’s main bargaining chip in the relationship is an old drawing that Faith’s mother left behind, now in the possession of Dogen.

There is a lot of action in the pages, but like the source material, these action scenes consist of free running, parkour, and the occasional martial arts. There is no gore aside from a few bloodied noses, and none of the main characters use any weapons. Even the enforcers rely on non-lethal weaponry to subdue offenders.

The downside to this story is that the beauty of parkour and free running, so evident in the game, are completely lost on static panels. A comic book is not the ideal medium for the fundamental attraction of the game. Thankfully, the action scenes are not the main selling point of the comic.

The dealings between Dogen and Faith serve as the focal point for all the other plot points in the narrative. Faith’s missions are so risky that not even the runners will dare get involved, which does nothing but aggravate Faith’s other father figure Noah, who (inevitably, perhaps) seems to have a shared history with Dogen.

The biggest assignment Faith gets from Dogen, one that serves as an ultimatum that comes with threats of physical harm, requires her to break one of the runners’ codes – which is to never steal from another runner. What makes matters worse is that the target in question is Celeste, a close friend of Faith’s and the only other runner in the city who can match her skills. The worst part is that the item that needs to be stolen is an experimental vaccine for melanoma cancer meant for Celeste’s younger sister.

This is the main conflict in the story: does Faith break the runner code ensuring that she will be shunned as an outcast by those who are already outcasts of society, while at the same time breaking a friend’s trust and most likely condemning a person to death? Or does she go against Dogen’s wishes, which in turn could lead to falling out of favor with the most dangerous person in the city, and losing the last thing her mother left behind?

Fans of the video game are obviously the target market for this miniseries and such is the popularity of the game that they will most likely buy the comic without needing any recommendations. Further, publisher Dark Horse Comics does not hide the fact that the mini-series is essentially a teaser for the upcoming videogame sequel (the ending, while not a cliffhanger, leads directly to the events of the videogame, expressly stated on the last panel.)

“Mirror’s Edge – Exordium” in the end seems like a waste of talent. Mr Emgard seems to have the knack for snappy, believable dialogue and decent characters but appears to have found it difficult to apply everything to a story so encumbered by an existing lore.

Mr Emgard is also the writer for the videogame. Is the comic a mere merchandise tie-in as opposed to its own individual property? The absence of flesh on the bone leads to that conclusion. The comic is there to help sell a videogame and does not function happily as a creative work in its own right. Only buy this comic if you need something good to read in an afternoon and do not mind having gaps in the plot.