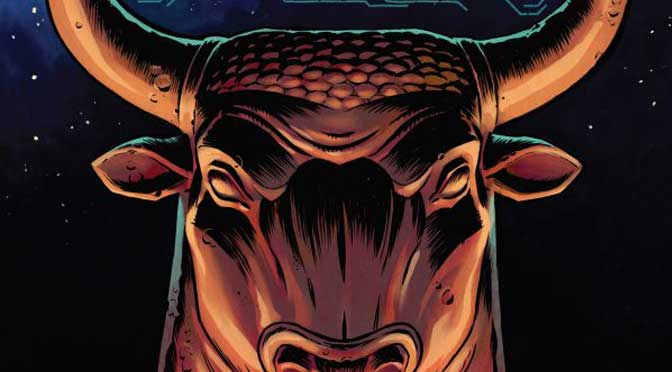 “Kill the Minotaur” is a new comic book miniseries from American publisher Image Comics. It is a retelling of the ancient Greek myth of Theseus and the Minotaur. Based on the first two issues, our immediate assessment is this revisiting of the myth does not aim to provide a fresh new twist on the outwitting by Theseus of the Minotaur in the labyrinth. Instead it tries to delve deeper into the story, providing ample exposition into the key players and situations that make up the narrative.

King Minos of Crete, the main antagonist, is every bit as merciless as his depiction in the classic story. But the comic shines a light into the catalyst for his terrible deeds. Minos’ son, the Minotaur, can only be sated with human sacrifices. Minos sends a Cretan fleet to Athens every seven solar years, demanding tribute in the form of the town’s most beautiful maidens and most courageous young men (who, as the story eventually reveals, are then sacrificed to the half-man, half-bull monster).

Aegeas, the King of Athens, bleeds ineptitude and cowardice. It does not excuse the Cretan King’s actions, but the decision by the writers to at least portray the flaws on both sides of the conflict ensure that Minos is not (lazily) portrayed as a one-dimensional tyrant who oppresses people just for the sake of being evil.

At the opposite end is the protagonist Theseus. Again, to their credit, the writers of the comic make a significant effort not to box the character within the glossy action hero stereotype. Theseus is brave, physically gifted, and possesses a genuine concern for his colleagues. But he is also foolhardy, impulsive, and his motivations seem to be colored ever so slightly by a desire for personal glory. The flaws add flavor to the plot. While readers, aware of the myth, expect the character to survive the story, there is uncertainty as to how many mistakes and losses the character will have to suffer before everything is over and done with.

The structure of the story as it is presented in the first two issues are also refreshing. A group of young men and women trapped in a dark, unfamiliar territory, stalked and slowly killed one by one by an unseen monster. The story still retains the feel of ancient Greece but the narrative feels inspired by contemporary horror films. Our only complaint is with the dialogue. The comic confusingly uses contemporary crude parlance, which is jarring. The writers use dialogue that takes care to ensure that commoners address Prince Theseus properly. But then the prince answers with “…he dropped you like a shit squeezed out of his fat royal ass.” It is even made worse by the constant barrage of profanities uttered by the character. Often unnecessary for a story set in modern times, other than for Andrew Dice Clay-esque shock value, it is completely out of place in a story based firmly in ancient Greek mythology.

Outside of the disappointing vocabulary of the protagonist, there is a lot to recommend in “Kill the Minotaur”. So far we have only the second issue, but all the important pieces are already on the chessboard, and the story has already built a momentum. The second issue also features a cliffhanger around the Minotaur, which opens up another set of questions that will need to be answered in the coming issues.