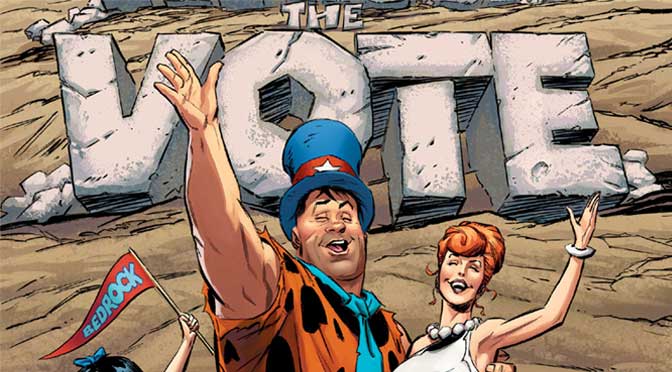 Early into the fifth issue of “The Flintstones”, Barney Rubble comments that “This all feels familiar, doesn’t it, Fred?” Familiarity is an odd, even paradoxical, description of this relaunch by American publisher DC Comics. Even as the series dramatically reinvents the world and characters of Hanna-Barbera’s Bedrock as they first appeared in the 1960s, The Flintstones comic feels all the more familiar in its modern relevance. Barney asks this question, after all, while the two are sitting in a “Starbricks Coffee” cafe. This would of course never have occurred in the 1960s cartoon. This contemporary familiarity is amplified in The Flintstones #5, the Election Day special, as the series continues to draw from modern references.

On the surface, the comic reboot’s set-up is close enough to that of the 56-year-old cartoon. Readers are brought to prehistoric Bedrock where Fred and Wilma Flintstone live with their daughter, Pebbles, and their neighbors: Barney, Betty, and Bamm-Bamm Rubble. The two children, however, are teenagers in this version of the concept. Pebbles sports a “Bomb the Basalt” t-shirt and plenty of sarcasm, while the ever-grinning Bamm-Bamm uses his innate immense strength to pick up school bullies with ease. “Older” is a term that describes not only these characters, but the comic generally. Other characters and elements receive more mature updates. Fred’s fiery temper and Barney’s chuckling voice are gone, replaced by a subdued sadness and insightfulness. The iconic “Yabba-daba-doo,” as revealed in the first issue, is no longer Fred’s nonsense catchphrase, but a mantra used in a PTSD support group attended by Fred and Barney, who are, unexpectedly, military veterans. These elements result in the comic often being poignant.

The Flintstones #5 is, in many ways, a culmination of these changes made to Fred and Barney, while the “Election” aspect of the issue is largely designated to sub-plots. Pebbles and Bamm-Bamm endure an election for their school’s President, while Bedrock undergoes a mayoral election radicalized by fears of an invading “Lizard People”, sadly reminiscent of contemporary political topics. This xenophobia is familiar to Fred and Barney because Bedrock’s past fear of an encroaching “Tree People” prompted them into joining the army. The brunt of the issue is spent as a flashback of their time as soldiers, Full Metal Jacket-style with rock-throwing rifles, from their time in Basic Training to the killing fields. The flashback ends with a twist to Flintstones canon that’s not too surprising, but remains satisfying.

What cannot be accurately described in summary is the issue’s humor, which writer Mark Russel consistently delivers by lambasting what is familiar to readers during this election cycle, from political rallies to easily swayed voters. Artist Steve Pugh is impeccable here, and every bit as important in making jokes land. The more bizarre lines, such as one where a drill sergeant yells to his trainees that “Monkey bars are victory! Monkey bars are life” would fall flat without the expressively detailed panel rendered by Pugh. The distinctive approach presents a departure from the characters’ original look. The result is a vibrant breath of fresh air.

With Russel and Pugh, the series continues to be an ever-surprising success. Even though the election subplots seem a little scant and close off a little too quickly, The Flintstones #5 is a satisfying, funny ride. The issue’s satire of familiar American politics is a reminder of the strange time we are living in. Stranger still is that a comic based on The Flintstones manages to be this good.