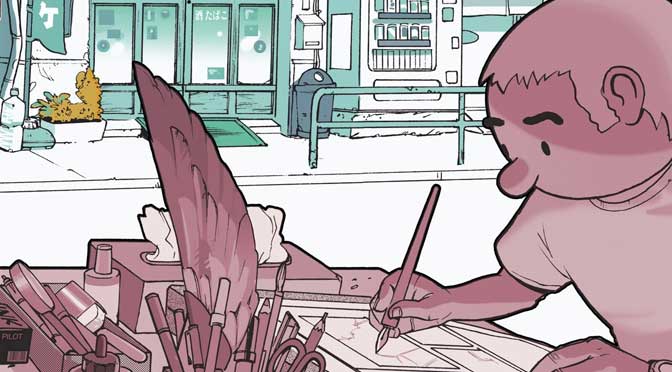 When bathing in that deepest of self-absorbed writing indulgence, the autobiography, there is a natural tendency for the unsophisticated towards apology, justification, or penitence. SuperTokyoLand is an autobiographical adventure of a French cartoonist’s extended stay in Japan, but has none of these things. As an expatriate living in a country with its particular customs and eccentricities, writer Benjamin Reiss spends time scrubbing away at his mild culture shock, with his story told as a flashback during a shared ride to Lyon.

SuperTokyoLand is unique from three perspectives:

a. it is a slice of life story, but one spread out over seven years: Mr Reiss’ stay in Japan creeps out sans plan; and
b. Mr Reiss uses the Franco-Belgian artistic style of Ligne Claire to tell his story, but intermingles that with manga techniques to produce an interesting cross-cultural visual melange.
We will look to the third unique aspect of this story shortly.

We have previously talked about the strange sense of alienation that a Westerner can experience living in Japan. But Mr Reiss seems more adaptable to Japanese culture shock than most Westerners: he seems to land on his feet in even exceptional circumstances. Mr Reiss in this story describes how he followed a girlfriend named Kayoko from France to Japan, only to have her entirely disappear in the enormous mass of people and buildings that is Tokyo. (Mr Reiss many years later meets her again. It evolves she returned to her Japanese boyfriend and their relationship in France was an overseas romance. But the coffee discussion seems to be more about Mr Reiss posturing to her, than seeking emotional closure.)

Mr Reiss wanders Tokyo, happening upon eclectic streets and people. He spends a lot of time in public sento baths, comes to love the food, and, amusingly, learns how to play the enormous traditional taiko drums. The narration is unaffected and conversational: the reader is made to feel that he or she is a companion on the car ride to Lyon.

Mr Reiss is a cartoonist and so he has certain insights into Japan’s manga industry by reason of his occasional employment as an assistant cartoonist. The remarkable aspect of this is that it is for the most part a cottage industry. Manga creators and their cohorts of assistants all work from very small spaces – often spare rooms in houses – for long hours. As a consequence Mr Reiss meets many well-known manga creators, including Megumi Igarashi, whose recent issues with Japanese authorities over obscenity charges we have previously covered.

The third unique aspect of this story is one of self-characterisation. Mr Reiss, unintentionally we assume, reveals himself as so vague as to be almost dislikable. He is sacked from a job as a mentor to foreign students when he genuinely but inexplicably fails to remember that he borrowed without permission a student’s bicycle. He casually lies to a concerned official so as to get past Japanese customs after an overnight trip to Seoul, in order to illegally extend his visa. He is unaffected in finally meeting Kayoko, the woman he followed to Japan, and even slightly lecherously about her appearance. He tells the full story of his seven years in Tokyo during his ride to Lyon through irritation, but only in the hope to quell questions from his companions through a long and meandering monologue.

It is rare for an autobiography to trigger this reaction. We doubt it was the intention. Instead, we are directed by Mr Reiss to mirror his mild bemusement over the quirks of life in Tokyo, or as Mr Reiss calls it, “Super Tokyo Land”. But even that title is puerile. The bath is shallow.