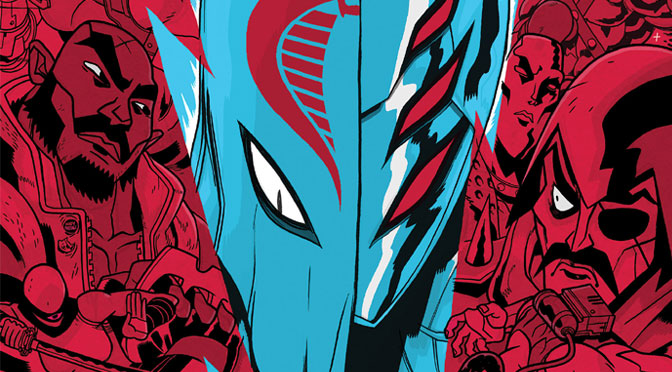 The “G.I. Joe” franchise started as a line of toys produced and owned by toy company Hasbro, originally created in 1964 and consisted of 12-inch figures representing four branches of the U.S. armed forces ( both “G.I.” and “Joe” were generic terms for U.S. soldiers in World War Two though the latter term has become derogatory in some South East Asian countries.) The toyline is responsible for popularizing the term “action figure,” and at the time developed a small following among young boys.

This small following would see a marked increase in 1982, when the toyline was relaunched as smaller (3.75 inch) figures and conceptually expanded with more creative, fictional designs, and a background story that pitted the Joes against the terrorist group Cobra and its leader, Cobra Commander.This backstory served as the springboard for spin-offs on various media including cartoons, video games, motion pictures, and comic books.

Cobra Commander has always been seen as a vaudevillian mastermind whose desire for world domination is always let down by his (and his subordinates’) slapstick ineptitude. The character is a Saturday morning cartoon villain who dreams up ridiculously complex plots designed to achieve something that would be more easily accomplished by guns and bombs. This title explores what would happen if Cobra Commander actually planned and executed with deliberate ruthlessness, and succeeds.

IDW is the most recent publisher to have secured the license to commercialize “G.I. Joe” for comic books, and has included the series in its March 2016 “Deviations” campaign. “Deviations” paints one-shot stories that explore alternate realities in their existing titles, in a way which is similar to what Marvel and DC have done with their respective “What If…?” and “Elseworld” titles.

We previously reviewed “Transformers: Deviations“, and were disappointed with the lack of depth in a story that tackled one of the most pivotal and significant events in that franchise.

“G.I. Joe: Deviations” is, fortunately, quite different. Initially the reader is given the impression that the author is not taking the story seriously, as in-jokes are mixed with action scenes and some of the sillier aspects of the cartoon are lampooned. But the author, Paul Allor, manages to tell a story that is both a dark take and a somber end to the franchise.

The story opens in the traditions of a standard G.I. Joe cartoon, with the Joes locked in pitched battle against the forces of Cobra. It changes tone quickly and focuses on one of the suspensions of disbelief associated with the franchise – the fact that Cobra has always had access to various technological advancements that should have allowed the organization to beat the G.I. Joes, on multiple occasions. In “Deviations”, an unspecified machine that gives Cobra direct control over the weather is deployed lethally. This leads to the deaths of the G.I. Joes save for a handful who went into hiding.

Mr Allors then fast-forwards the story to 5 years after the defeat of the G.I. Joes. Readers get a glimpse of what the world is like under Cobra’s rule, as well as what became of Cobra upon victory. Cobra’s strategy of sowing chaos and disorder is redundant, now that they own the world. Cobra becomes an autocratic government that is, surprisingly, popular. Cobra turns out to be efficient rulers who keep crime in check. Cobra’s key members become corporate figures and government officials, save for a handful who are permitted to continue their old line of work as spies and enforcers.

The twist in this title is fascinating. Cobra Commander, as it turns out, is not a businessman or a politician, and does not really want to own the world. The transition to administrator is beyond him. Instead, the character is compelled to again sow discord and cause destabilization. Cobra Commander plots the downfall of Cobra and enlists the remnants of the G.I. Joes to assist in that task.

This has been done before: most notably, writer Mark Millar in “Wanted” (Top Cow/Millarworld, 2003) had villain Mr Rictus determined to cease being a ruler and indulge in grand, wanton evil. But it is an inspiration on the behalf of Mr Allors to imbue a pathology into a ham villain such that the character is compelled to turn against his own organization upon achieving its ultimate prize.

We had low expectations for this title. We are pleasantly surprised that the story is propelled by a sophisticated twist in characterization, and we look forward to reading Mr Allors’ future work.

The X-Files: Deviations – A Whole Lot of Nothing