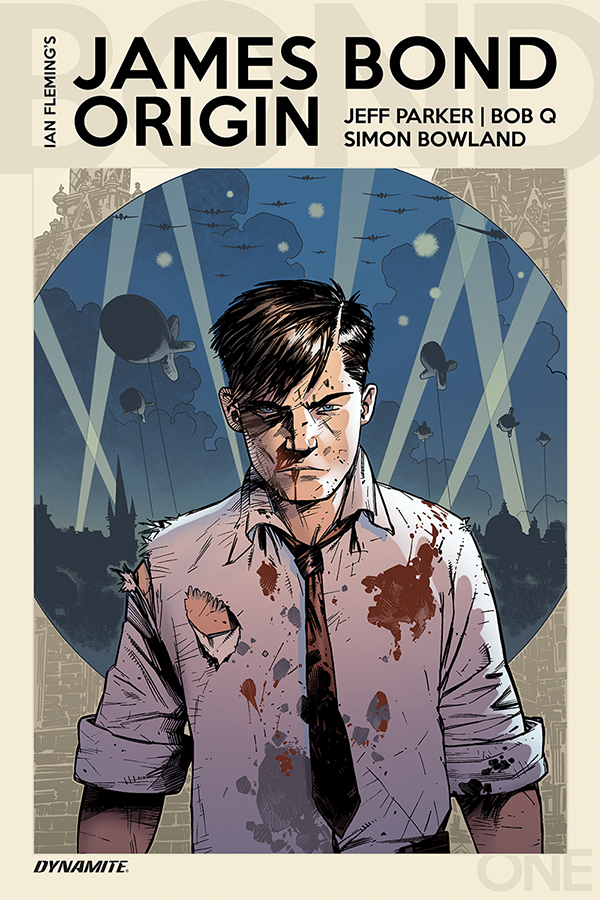 Gleaned from the traces of concepts written by the character’s creator in various novels, Ian Fleming’s James Bond Origin #1 is, as with all of published Dynamite Entertainment’s James Bond publications, carefully curated by Ian Fleming Publications Limited. Thus we have here in this comic as close to an authenticated origin of the fictional, internationally famous spy James Bond as we will ever encounter.

The story is set in World War Two, and this issue begins with, and then reaches its climax when the German Luftwaffe bombs Clydebank in Scotland. A group of school boys from Fettes College, visiting the shipyards, is caught up in the firestorm. Amongst them is the teenaged James Bond, suddenly and unexpectedly appearing, dashing about and saving the lives of his fellow school mates.

For those of us who have read the adventures of James Bond (and we have reviewed many of the recent comics), with its murders, intrigues, betrayals, and promiscuousness, it is startling to see Bond as a school boy. Who would have ever thought Bond could be young and relatively innocent? Bond has always previously an adult engaged in very adult activities. Glimpses of a childhood have been rare and remote.

What is obvious is that the young Bond is a different person. There is the relentlessness and the combat skills (Bond’s judo is good enough for him to teach it to his school chums). But the bad habits have not set in. This is where the story is miscalibrated. Bond seems odd as ever being too young not to drink, smoke, or have sex. Without these vices on display, the young Bond is a flawless teen, and a tabula rasa for those elements of his personality which makes the notorious rogue who happens to be working for Queen and Country. There are no serrated edges as yet.

And as such, the story reads very much like a sanitised war adventure for boys. Bond is involved with friends and acquaintances of his deceased parents, all of whom seem to want to intervene in Bond’s life and shape him in obligation to the dead mother and father. Kindly adults set him on the path to service to his country as to future thrills and adventures, like some 1950s pulp story for children orphaned in the war. Lieutenant-Commander Russell Weldon and Professor Hans Keller both knew Andrew and Monique Bond and held them in high regard. When Bond, who is depicted as an adult to have a misogynistic view of women, is shown by Keller a photograph of the beautiful Monique Delacroix, his mother, as a university student, we are caused to wonder whether abandonment issues are the psychological trigger for his murderous career choice. But at this point in time, as depicted in this comic, Bond is an orphan, but not a charismatic, damaged killer. Whatever causes that transformation has not yet occurred.

Keller is beaten to death by German spies, and his last words to Bond are to do with Nazi rockets. Bond is overwhelmed by the two assassins in a skirmish. Bond tries to stop the Nazis, and then is forced to pursue them on a bicycle. This leads him to Clydebank and the falling bombs.

Between all of that, a school fight in which Bond displays his proficiency, there is plenty of adventure. But it is a non-alcoholic mix, a soda without the Scotch. Perhaps things will be grittier for Bond as the story progresses.