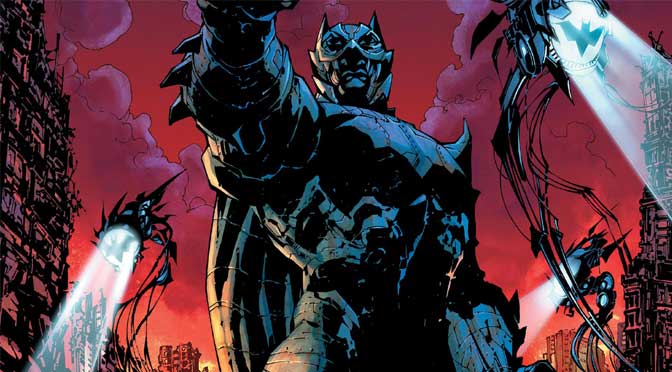 The man who controlled the world’s largest empire by land mass was Tamer the Lame (or Tamerlane). Known also as the “Scourge of God”, Tamerlane was a nomadic warlord who carved his dominion out of Central Asia in the 14th century. Amongst his other gruesome deeds was the beheading of 90000 citizens of Baghdad, and the construction of high towers with their skulls.

In the promotional copy / interview sitting at the conclusion of “Dark Days: The Forge #1”, one of the writers, Scott Snyder, is quoted describing the series, “…above all, it’s going to be FUN. Even with terror and nightmares, it won’t be grim. Dark Nights: Metal will be celebratory, huge and crazy.”

Yet the front cover to this issue, an image of a massive statue (which is reappears approximately halfway through the issue), is not fun. It is oppressive. The cover image features a barbaric representation of DC Comics’ flagship character, Batman, as a thorned colossus, a tower of iron casting a blackened clenched fist into the sky. Bound to the legs of the statue are naked prisoners, their blood running down the iron.

The image is far from “fun” and “celebratory”. When did Batman become Tamerlane?

This issue features a plot akin to a compound fracture. Shards of action lie close to skeletal bone. It is not clear looking at the extent of the incoherence what plot was intended. The writers, Mr Snyder and James Tynion IV, crudely mash together concepts and also diverse characters which longtime readers of DC Comics titles will recognise: the 2000s version of Mr Terrific, the 1940s version of Hawkman, an imprisoned Plastic Man, and the mainstay characters Superman, Green Lantern and Aquaman. Most of the interaction makes little sense. Mr Terrific inexplicably shows up in Batman’s secret lunar headquarters. Green Lantern has suddenly been given a mission by his alien supervisor which involves sneaking around in Batman’s Earth-based cave. The vehicle for Hawkman’s contribution to the plot is a rambling series of diary entries. A bizarre tour of a tunnel annex to the Batcave includes hologram histories of Batman’s adventures, viva voce presented by the tunnel’s occupant, Batman’s murderous archenemy, the Joker.

The issue makes as much sense as a car crash.

Batman’s ongoing popularity extends back to the 1930s. The character, and its writers and editors, have had to accomodate time’s passage. A certain type of thematic flexibility is an indicia of the character’s perpetuated existence.

There is a theory that Batman is a barometer of social and political change. Some of the examples supporting this theory might be considered judicious or even outright cherry picking, but tracing the timeline is instructive.

This reflection of culture and politics goes back through to World War Two, but from 1966, with the advent of the goofy “Batman” television series, the mirror becomes more clearer. The lighthearted television series with its psychedelic overtones was a reflection of late 1960s social liberalisation. By the liberal Carter era of the 1970s, comic book Batman was primarily a detective, relying upon wits and resourcefulness, serious but capable of a smile. But the popularity of the title was in slow decline, as the character become increasingly irrelevant.

In 1986, however, with the grim social consequences of Reaganomics in full swing and stark confrontation with the Soviet Union, DC Comics released “The Dark Knight Returns”. This iconic series, written by Frank Miller, featured Batman as an insurgent general. Batman first turns the tide on rampant criminal violence caused by fiscal restraint, and then holds together his home town of Gotham City after a Soviet preemptive nuclear strike. The concerns of jobs, the absence of a social safety net, and the USSR are all manifest in this story. Then, in 1988-1989, Batman’s teenaged sidekick Robin was beaten to death in the notorious “A Death in the Family” storyline, in essence assassinated by a reader vote.

In the 1990s, geopolitical sunniness best captured in Francis Fukuyama’s “The End of History” (1992), arising from the surprise conclusion of the Cold War, did not change the tone of comic book Batman. The “Knightfall” story (1993) depicted a villain breaking Batman’s spine, and Batman’s replacement by an armoured assassin with claws. Batman motion pictures released during this time, however, were positively flippant. “Batman Forever” (1992) and the frivolous “Batman and Robin” (1997) characterised a lighthearted change of theme, with the 1997 movie’s most controversial aspect being pre-formed rubber nipples on Batman’s costume.

After the terrorist attacks on New York’s World Trade Center in 2011 and the US-led invasions of Afghanistan Iraq, Batman’s tone swung back to intense seriousness. Christopher Nolan’s Batman trilogy of motion pictures, running from 2005 to 2012, depicted a Batman in a tank. (This New Statesman article posits that the last 2012 motion picture in the trilogy is an ultimate “Occupy Wall Street” story, featuring Dickensian anxiety around inequality.) The 2009 video game “Batman: Arkham Asylum” featured a paramilitary Batman in a costume akin to riot police armour. The 2016 motion picture “Batman v Superman” featured a violent version of Batman who brands criminals, and uses heavy duty armour to defeat Superman. In that motion picture, Batman notes to his butler, Alfred, “We’re criminals” (a line from Mr Miller’s “The Dark Knight Returns), seeking to justify his torture of his adversaries at a time when American politicians and generals sought to justify waterboarding and the moral depravities of Al Ghraib prison in Iraq. (As this FHM article observes the film also explores the helplessness felt by Americans watching the destruction of the World Trade Center on 9/11.)

Other arts plainly mirror politics and economics. This is most physically obvious with architecture. In the twentieth century, German and Russian politics manifested respectively in Nazi grandeur and Soviet brutalism. In the nineteenth century, British imperialism produced the magnificence of Victorian London: Napoleon III’s Belle Époque Paris reflects a resurgent and recovered France. Fine art is even more representative of shifts in political and economic fortunes in a culture. Continue to narrow the focus, and can we say that Batman is a weathervane for American politics and culture?

(We first read of this theory on the now defunct DC Comics message board in 2000, and now cannot regrettably locate a source. Any assistance from our readers would be gratefully received.)

For all of its many, many flaws, “Dark Days: The Forge” #1 introduces a new iteration of Batman. This Batman:

a. is manifestly Machiavellian, using his various friends (and also the Joker) as chess pieces on a translunar board. In many ways, the character displays the “evil mastermind” qualities which would traditionally be vested in antagonists such as the hyper intelligent and vastly educated Fu Manchu from Sax Rohmer’s novels, or “Dr No” from Ian Fleming’s novel of the same name. In this title, Batman does not seem to be so much a protagonist as an antagonist;

b. is intensely secretive. The character has a “secret” lunar base. He also has a secret research laboratory, and when this is discovered by Aquaman, Batman provides no explanation for its existence in Aquaman’s ocean dominion. Instead, he orders his lieutenant to re-establish the lab, but this time away from the sea. Batman, in addition, has a secret annex to his secret cave. Secrets are built upon secrets. There is no transparency and no accountability to Batman’s actions;

c. is subject to investigation of his premises by the Green Lantern Corps. He is harbouring a threat of such magnitude that it requires the attention of intergalactic policeman, Green Lantern. Deep within the cavern, it seems that Batman has detained the Joker as a prisoner, without trial. There is another apparent prisoner on the moon – his ally Plastic Man, held in elaborate confinement;

d. has a “black ops team”. This is a group of superheroes called the Outsiders. Once, the comic book title “Batman and the Outsiders” consisted of a supportive family of characters, depicted as financially underwritten by Batman’s charming alter ego Bruce Wayne. The title and concept was created by writer Mike Barr in 1983. In this issue, in the space of one panel, the Outsiders have been re-rendered as an unsmiling assault team. Batman’s friend and colleague Green Lantern is depicted as unaware of the group’s existence, and astonished to learn of it;

e. is subject to an intergalactic search warrant, executed upon his premises in his absence;

f. is an uncertain friend. Superman and Aquaman treat Batman with guarded restraint and conditional support. Green Lantern conducts the search of the Batcave with trepidation. Batman has either cowed his allies or estranged them.

Has the wind turned? Batman has for some time been depicted as paranoid. In the 2000 story “Tower of Babel” Batman was revealed to have secret protocols to disable his friends. The justification for this ruthless planning was in the event of one or more of his colleagues’ telepathic or magical possession, or one of the other regular fan-pleasing plot devices by which superheroes compelled to fight each other.

But, here in the complete disregard for the opinions of friends, the multi-layered secrecy and calculated avoidance of transparency, the independent investigation into his explosive secret, all suggests that the writers of this title have a political message for which Batman is, yet again, the vehicle.

More than this, however, is the cover image we refer to above. Batman as Ozymandias, honoured by a vast iron statue serving as both vehicle of torture and fascist iconography. Batman as a Stalinist cult of personality. An authoritarian Batman for the twenty-first century. That is a disturbing twirl of the weathervane.