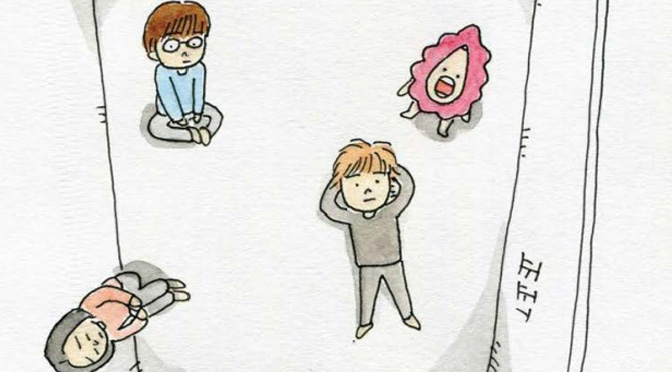 “What is Obscenity?”
(Koyama Press, May 2016)
Writer: Rokudenashiko

We start this article by noting it is not a review: we have not yet received a copy of the graphic novel, “What is Obscenity?” But we look forward to doing that, and in any event the stir surrounding Rokudenashiko and her work is of itself newsworthy.

As we have previously discussed in our article on “Prison School”, comic books in Japan (“manga”) are frequently a creative vehicle for pornography. Article 175 of the Criminal Code of Japan forbids distributing “indecent” materials. The practical consequence of that law is that gentalia is either drawn in an entirely fuzzy or obscured way, or are overlaid by a “mozaiku” (meaning a “mosaic”, or pixelated image).

The precedent for the publication of obscenity in mangas is recent. In January 2004 artist Suwa Yuuji and editor Motonori Kishi, editor of publishing firm Shobunkan, were tried on obscenity charges for the hentai manga called “Misshitsu” (“Honey Room”). This resulted in the imposition of a fine of 500,000 yen: a custodial sentence was avoided by the defendants pleading guilty to the charge. Notwithstanding the guilty plea, the defendants appealed to the Supreme Court of Japan arguing that, first, that the publication was not as indecent and explicit as material found on the Internet and so therefore the court’s views on what constituted “obscenity” need to be recalibrated having regard to contemporary views, and second, that Article 175 of the Criminal Code was inconsistent with Article 21 of the Japanese Constitution’s protection of freedom of expression. But the Supreme Court disagreed, noting that images included large and detailed genitalia that the judges ruled as “irredeemably obscene” and upheld the ruling: further, the fine was increased to 1.5 million yen.

“Rokudenashiko” translates as “good-for-nothing girl”, and is the nom de plume of Japanese manga writer and artist Megumi Igarashi. Rokudenashiko Igarashi was first arrested on charges of obscenity in Tokyo in July 2014 following a crowdfunding campaign to raise money to 3D print a kayak which was created from a mould modelled on her vagina. An application for her detention was rejected by the court. She was arrested again in December 2015 after it was alleged she was distributing data on how to replicate the mould. Rokudenashiko argued in her defence that by way of thanks she gave access to the data to a handful of people who had provided her with financial support for her art. The trial in the Tokyo District Court took place in April 2016 and a verdict was delivered on 9 May 2016.

On the back of her experiences, Rokudenashiko has released a graphic novel, called “What is Obscenity?” From the pages we have seen, it is, given the ostensible subject matter, perhaps surprisingly thoughtful:

The Japan Times has recently written on the trial:

“…it was this aspect of the trial — the idea that police, prosecutors and judges were the only people making claims that Rokudenashiko’s work was arousing — that gave the story its eyebrow-raising subtext. The artist’s aim of countering the authorities’ reception of female genitalia as something disgusting through the use of humor found its most successful expression in the courtroom. The trial itself was a work of art, though it was definitely not a solo show.

“The prosecution’s case was based on the idea of pornography as something that stimulates sexual desire to the extent that the consumer feels “self-loathing.” This is a highly subjective call. The prosecution would have to generalize the reaction to the 3-D data, which is hypothetical anyway, since none of the people who received it turned it into something that resembled a vagina.

“So the strategy became one of subtraction: remove the “art” component and what you have is pornography, because according to their logic there are only two ways to consume information of a sexual nature.”

Another Japanese newspaper, Asahi Shimbun, castigated the police and prosecutors for their role in the arrest and trial.

The court found against Rokudenashiko on the basis that that a vagina-shaped kayak is art while on display as a “sort of pop art”, but distributing it in the form of digital data was an obscenity. The ruling said her act “has a high risk of harming the order of sex life and the healthy sexual manners of society.” The court fined her ¥400,000, which was approximately half the amount the prosecution sought to be imposed. As the Japan Times says, “It’s notable that the sentence was delivered by a female judge.” An appeal was reportedly lodged the same day.

The attention that Rokudenashiko has received, as well as the experience of her detention, caused her to publish this graphic novel. In our view, at least the graphic novel is the single positive thing to come out of a clear waste of the Tokyo District Court’s time and the Japanese taxpayer’s money.

Tags: Japan, rokudenashiko, what is obscenity