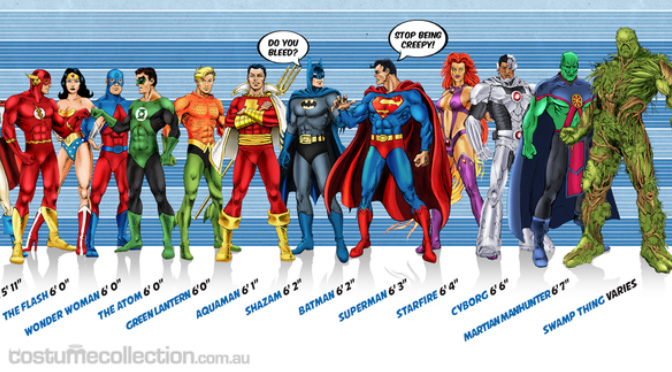 Infographics are a visually engaging, sometimes clever, and usually innovative way of projecting information. There have been some excellent infographics published in respect of comic books (and related media) recently. Here are our top ten, in reverse order. (Where we have been able to credit the creators, we have done so.) The only shame of these is that the concepts almost exclusively relate to the titles of the two big US publishers, DC Comics and Marvel Comics. If readers are aware of any others, especially relating to other publishers, please let us know.

This is a fun image, which makes you realise that DC Comics’ character, tough guy assassin Deathstroke, really needs to shave.

9. Visualising the Deaths and Resurrections of the Most Iconic Superheroes
Creator: Tim Leong, Comics Foundry
(as reported in Wired Magazine, 17 June 2013)

An excellent capture of the torturous deaths and rebirths of superheroes (albeit one already a little out of date). Some characters are simply not permitted to die.

7. Data Visualizations of Every Avengers Comic Ever
Creator: Jer Thorp

The sheer amount of data which has gone into this infographic is extraordinary. Only a committed Avengers fan could have achieved such a detailed analysis encapsulating both plots and characters.

Again, another one of ours, demonstrating that setting up shop in space as a superhero isn’t a very safe thing to do.

In the interests of publisher neutrality, we have let two infographics these have joint fifth place.

Marvel Comics’ character Wolverine is always depicted as reasonably short. Looking at this fun infographic makes you question the common sense of fighting the Hulk when you are barely five foot tall.

This infographic is more than just a visual exploration of jumping from a balcony while wearing a mask and cape: the mathematics of the exercise are included as well.

3. The History of Batman’s Utility Belts

Another infographic relating to Batman and another one from GeekTyrant.com. This visualisation demonstrates that Batman is an early adopter of esoteric technology.

This is a beautiful, enormous infographic which must have taken a monumental amount of time to create. We tip our hat to designer Dave Columbus for his raw enthusiasm.

Finally, our favourite infographic – and from a very unlikely source. The Economist is a weekly magazine published out of England, dealing with world current affairs and finances. In this clear, crisp infographic The Economist compares the profitability of every movie based upon a DC Comics or Marvel Comics character or characters, over a time period of 1978 to 2013.

A dream! A hoax! An imaginary story!