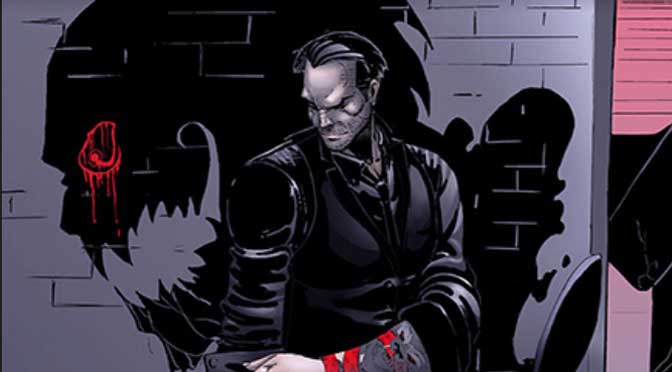 The promotional copy for this comic describes it in the following terms:

A grindhouse film-inspired revenge thriller in the same vein as ‘Kill Bill’, with the sheer grit and dark, supernatural overtone of ‘The Crow’ (particularly the comic series)… Eat the Shadow tells the story of Kenji who, with the help of his dead brother’s ghost, hunts down the infamously sadistic yakuza boss who slaughtered his family.

But this is too modest, and perhaps even a dumbed-down summation. The title goes much further than this. This first, fifty-seven page issue is divided into three unique parts. Each part of the triptych appears to be interconnected in some way, but as yet only the first two parts have an obvious link. Given the violent and drug-fuelled subject matter, and the fact that the third element takes place a month before the first two, there is a hint of Quentin Tarantino’s non-linear plot sequencing about this title.

It is an odd niche to fill, but comic books, with their strong visual message, are inherently ideal for depicting drug hallucination. The beginning of this comic is a Hunter S. Thompson melange of psychedelic delusion and lust, culminating in dirty toilet sex (at least, almost sex but not quite). This first element in the triptych is gritty, confronting, and base.

The scene begins with a “Molotov’s Cocktail of psychedelics” being conveyed from palm to hand. The drugs are manufactured by a “legit chem wiz”, a leading light at the University of Tokyo who has gone astray “down the rabbit hole”. The main character in this episode, Kenji, is having garish, entirely out-of-control nightclub fun culminating in a classic letdown for a wasted young man on the prowl – the girl he seems to be doing so well with was happy to take his gift of drugs and give him a lap dance, but is menstruating and, ultimately, not interested in sex. “Better luck next time, cupcake.” The reader follows Kenji along for the ride and the literal anticlimax is palpable. The blurry, crazy roller coaster ride is strongly reminiscent of the banned video clip for The Prodigy’s song “Smack My Bitch Up” or the drug scenes from William Gibson’s Neuromancer (1984). The narrative is crisp and very engaging.

The second element in the triptych is much weaker than the first. It follows Kenji as his drug trip turns bad. Kenji traverses through a hellish landscape of bloated amputees, tortured flesh, and demons. Some of this is genuinely horrid, and some is cliched. The nadir of the hallucination involves the threatened rape and torture by a spiked and hulking demon of Kenji’s dead sister, Minji.

The demon knows Kenji, and there is the suggestion that it is something more tangible and familiar than merely a subconscious manifestation of Kenji’s survivor’s guilt.

Some of the narrative in this is somewhat cliched. “The worst of all evils hides itself in the dark,” mutters Kenji, entirely out of character. “Step into the shadows… to find truth.. to find…” This section of the triptych ends inconclusively with a blood-smeared warning on the wall of an operating theatre: “REMEMBER ME.” Whether this bodes ongoing psychosis for Kenji remains to be seen.

The third part of the triptych is entirely different. The plot and dialogue read like an early chapter of Brian Azzarello’s “100 Bullets” (Vertigo Comics). Ethnic slurs and puerile sexual jibes are seeded like barbs along the landscape of dialogue. The realism is intense. The reader could be sitting in the car amidst these chatting characters, and their unpleasantness is immediate and palpable. The pauses, the venom, and the confronting dialogue all convey, with stiletto precision, thug characterisation. It is a wonderful thing to read.

The action is set on Kauai in the Hawaiian islands. The plot starts with a grumpy and reserved man on a tourist bus being castigated in a friendly way by the driver. The scene switches to the backseat of a limousine, with some Yamaguchi-gumi Yakuza gangsters discussing with wry glee the recent and horrible fate of a Thai prostitute. The Chinese Triads responsible for improbably drowning the prostitute in semen will be hunted down and killed. There is an exchange tinged with disbelief as the men try to calculate the amount of semen this would have required. The imminent
retribution is as a consequence of killing the most profitable (and favourite) prostitute of a Yakuza boss named Hiro. It is the conversation of black-hearted career criminals.

The scene cuts back to the bus. The grumpy passenger removes a sweater, revealing gangster tattoos. He holds up the bus, and shoots out the engine of a car which had the misfortune of following the bus. This leads to a traffic jam, and that in turn interferes in the progress of the Yakuza in the limousine. The thugs decide to intervene in the scenario. “Any other day and I’d be inclined to tolerate and even empathise with a youth trying to make a living for himself,” the boss muses. “But as it is we’re pressed for time and I’d really prefer not to be made irritable.” There is much more of this very high quality dialogue, the detached calculation lounging in a bed of violence. It is a pleasure to read.

The hijacked bus is the prelude to a bloody ambush by a rival Yazuka clan. These men do not like the fact that the Yamaguchi-gumi have allied themselves to a crazed individual called the Barracuda. The boss sitting in the limousine, Fukihara-san, is offered the choice of assisting his ambushers in identifying the location of a warehouse where some Korean criminals are meeting, or facing a prolonged death. The thug speaking to Fukihara shows off his scars, apparently the result of torture at the hands of another Yamaguchi-gumi boss, to demonstrate that he has a vested interest in extracting information the slow way.

At the conclusion of the action, we have one gangster apologising to the bus driver for the consternation. “I imagine this all must have been… a very distasteful inconvenience to you all. But it had to seem real, you understand?” The gangster is indeed a Yakuza, affecting nobility and trying to excuse himself for terrifying the innocent bystanders which he used as props. And then the scene cuts to the warehouse, two black-suited Yakaza walking with purpose, and more imminent action.

This final element of the triptych could easily underpin the plot of a Yakuza movie, that genre of motion picture so popular in Japan. It is smart and well-executed.

It is hard to categorise this title. It does not rest easily in any thematic bucket. It is probably not “grindhouse”, although it does draw upon elements of that genre. A grindhouse comic would not be interspersed with quotations from Jung. It is deliberately lost somewhere within the category of “crime”. To that end, Mr Martinez does his job well. A text like this is not designed to rest easily in any way, including by way of definition.

This title will not be to everyone’s taste. “Eat the Shadow” is unadulterated and vile. It is also inspired. It is the brilliant, highly creative output of a gifted writer. We look forward to following his career.