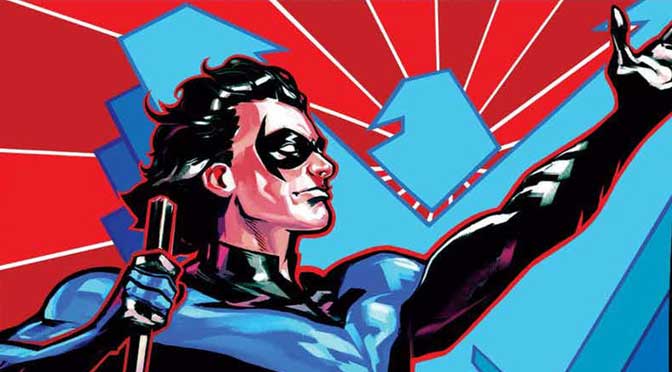 “Nightwing: The New Order” is a new comic book series from American publisher DC Comics. It focuses on the Batman’s former boy sidekick Dick Grayson. Having boy sidekicks was a common phenomenon for American superheroes, dating back to the 1940s, and Batman has had more of them than most.

Dick Grayson first served as a costumed crimefighter under the identity of “Robin,” before striking out on his own as the more mature superhero Nightwing. In more recent times, the surprisingly sophisticated title “Grayson” depicted the character as an un-costumed spy. Irrespective of attire, the character has always been depicted as struggling to get outside of Batman’s shadow. This is a concept which sits both within a fictional context as well as within the audience-related, commercial world: the significance of the Batman character within DC Comics’ continuity is so pronounced that the character is hard to avoid in any given title. And in the real world Batman is a globally-recognisable, massively lucrative brand: Nightwing is not and will never be.

Refreshingly, there is no sign of the Batman in “Nightwing: New Order” #1 despite being set in Gotham City. The narrative revolves around Dick Grayson rather than his costumed alter ego. The story is set in a possible alternate future, but is structured as a flashback propelled by the first person narrative commentary of what is soon revealed to be Dick Grayson’s son.

This comic paints a bleak and almost dystopian picture of DC’s superhero-dominant continuity. The first few pages hammers this home—Nightwing, with a large futuristic gun in his hands, is shown standing over the fallen bodies of his fellow superheroes. This includes powerful frontliners such as Superman, Wonder Woman, the Flash, Green Lantern, and so on. It is not made clear whether they are dead or alive, save for Superman who is still talking despite being impaled by steel rebars in various parts of his body. It is made obvious through their conversation that the superheroes’ defeat is at Nightwing’s hands. Despite feeling sorry for the harm he has caused his former friends, Nightwing is adamant that he is doing the right thing. The sidekick has become the conqueror. And unwavering zealotry is a trait normally associated with Batman, not Nightwing. It is a curious character evolution – but one easily capable of being devolved given this story is set in days to come.

The following pages expound on the grim state of affairs. Dick Grayson, for unrevealed reasons, spear-heads a vicious pogrom. This involves hunting down super-powered individuals and forcibly preventing each of them from accessing their inhuman abilities. The mechanics for this is revealed through a scene that shows Dick and a well-geared police force (dubbed “Crusaders”) hunting down the villain Dr. Light, and injecting him with a serum that blocks all of his powers.

The story also reveals that the serum does not work on each target. Approximately 10% of super powered individuals are immune to its effects. This brings up one of the mysteries (and potential twists) of the story: what does Dick Grayson and his Crusaders do to those whose super powers cannot be disabled? The dialogue hints at a prison that keeps super humans under stasis. Grayson’s regret suggests worse things bubbling underneath.

There are some poignant moments generated by Batman’s former butler Alfred Pennyworth visiting Grayson and his son. The characters talk about their very profound past. An integral part of the Batman mythos is that Pennyworth assisted Batman in raising Grayson after Grayson’s parents were shot dead. It seems that Pennyworth, while remaining civil with Grayson, is opposed to the actions committed by his former charge. The story also touches on the effects of Grayson’s public persona and actions over his son’s school life (the son is confronted by a classmate, who is a nephew of Dr. Light.) The issue culminates in a cliffhanger. Grayson is summoned to his son’s school and learns that his son is manifesting super powers.

Kyle Higgins’ writing is very solid. The story is effective in introducing the premise and its characters, as well as piquing the reader’s curiosity over the events that led to the current predatory state of affairs. What is the fate of certain key players within DC Comics’ regular continuity? Grayson, usually a mild, rational, and even happy character, is depicted as very much out of demeanour. Is Grayson motivated by the possible death of his surrogate father, Batman, at the hands of a superpowered being? Or did Grayson’s son’s mother die in similar circumstances? Even the use of internal monologue to drive a story in a visual medium, an approach that we generally believe is vastly overdone in American superhero comics, is effectively executed here and does not smother the tone of the story.

However, the downside of “Nightwing: The New Order” is the underpinning premise. It treads a very familiar path. The premise of super powered individuals being hunted down by the government and regulated under threat of incarceration is nothing new. Both DC Comics and its main competitor Marvel Comics have released numerous publications that deal with this theme. The concept was novel when writer Chris Claremont first used it in the notoriously brutal “Days of Future Past” story arc in “Uncanny X-Men” (1981). It is no longer novel: it is overwrought. There have been other iterations in the past decade which must still be fresh within the memories of regular readers of American superhero comics. Skilled storytelling by Mr Higgins does not counterbalance the absence of innovation in the plot’s superstructure.