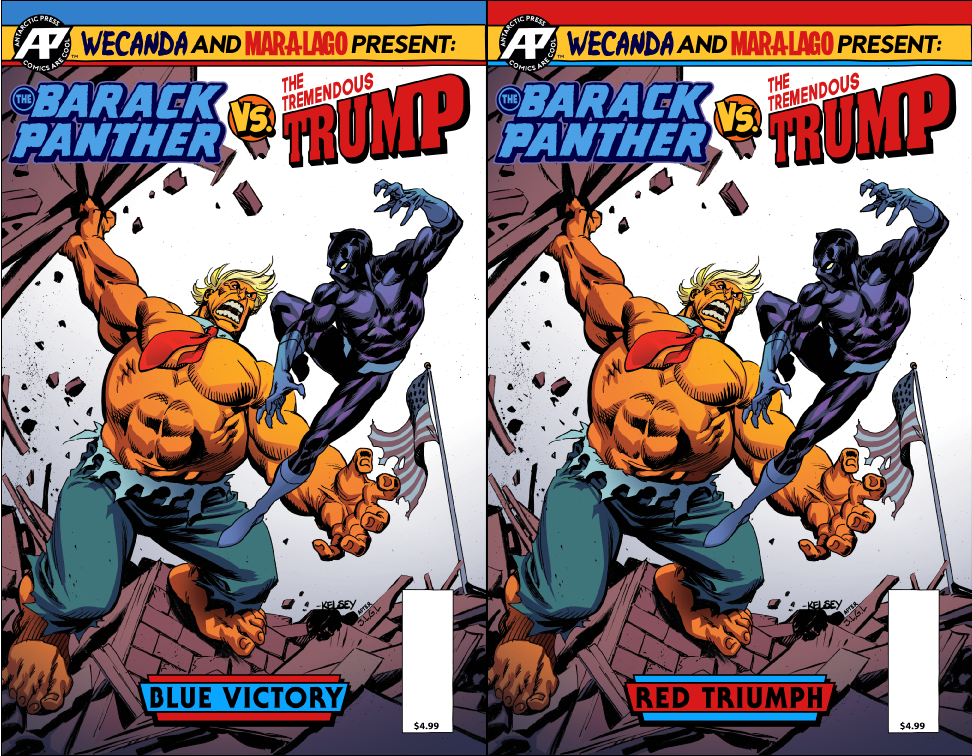 This is a bizarre comic. It imagines former US President Barack Obama as Marvel Comics’ costumed superhero Black Panther, fighting current US President Donald Trump. Mr Trump in this comic consumes a Cheez-Toes and transforms into an orange parody of Marvel Comics’ character the Hulk. The two characters are in combat with each other along the US-Mexican border.

Writer Kelsey Shannon has two version of this comic: “Blue Victory” in which Barack Panther wins, and “Red Triumph” in which The Tremendous Trump wins. We did not realise this until after we bought the comic, and so our view is confined to only the “Blue Victory” version.

The action is very straightforward: Mr Trump’s border war is almost completed, and Barack Panther rides on top of the roof of a freight train seeking to get through the gap before the last piece of wall is put in place. This leads to superhero fisticuffs typical of the genre.

It is always easy to make fun of Donald Trump. Mr Shannon gets in some good lines: when Trump, his wife Melania Trump and their son Baron Trump all arrive in the Marine One helicopter reserves for Presidential use, Trump says, “This is not my helicopter of course. Mine is way better than this but it’s down in Mar-a-Lago.” At one point when Trump is losing, he summons an orbital laser cannon operated by “Space Force One”. And Baron Trump is depicted as a freakish mutant who can destroy things with his mind.

But Mr Shannon also takes shots at Barack Obama. During his presidency, Mr Obama dramatically increased the use of military drones in war zones, considered by even left-wing commentators to be a “shameful part of his legacy”. In this comic, Barack Panther orders a drone strike on Trump. “People might not like drones,” the character poses,“but they tend to win any argument.” And Mr Shannon nails Mr Obama’s propensity for long-winded but stirring speeches: “This caravan is going to need help crossing the border into the new world. No walls can stop this runaway train of progress… the walls between countries with the most and those with the least cannot stand. These are the walls we must tear down!” And on the last page, after unifying a mother with her family, “Where you see limitation, I see hope. The hope of a mother. The hope of being reunited with her child. Dare we hope for a world where there are no walls dividing us, where people can live free and together in peace? Yes, we can.” Mr Shannon missed his calling as a script writer. The wonderful thing about this comic is that on a first read, it seems to be a superficial parody: on a second read, these small details emerge. It prompts out to seek out Barack Panther’s prior adventures.

As for the crazy lunatics at Antarctic Press who are responsible for this comic, the inside cover notes a forthcoming title, “Trump’s Space Force”. The cover art features all of the kitsch of James Bond’s Moonraker. We will be keeping an eye out for that.