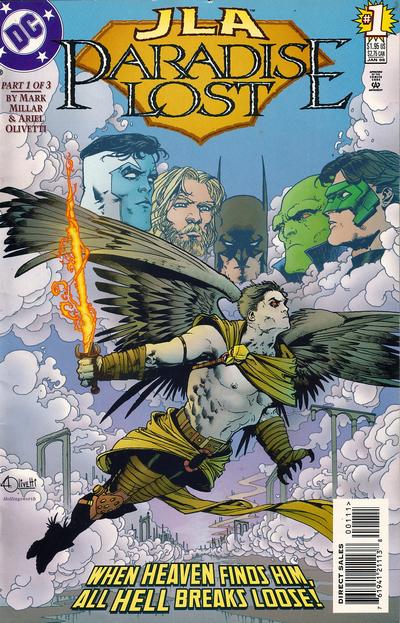 JLA: PARADISE LOST #1
DC Comics
“Someone to Watch Over Me”
story by Mark Millar
art by Ariel Olivetti
Review by Donald MacPherson
First published: 5 November 1997
Reproduced with the permission of the author

JLA is, of course, DC’s best-selling title, which is perfectly understandable. Also understandable is DC’s desire to cash in on that popularity. This is the first real JLA spin-off, a mini-series featuring Zauriel, the angelic hawk-man introduced a few months ago in, of course, JLA. At this point, DC is not at all overdoing the spin-off thing, but with the upcoming (and anticipated) JLA: YEAR ONE and who knows what else, I fear DC might milk this new cash cow dry. Just a little warning.

One can be sure that JLA writer Grant Morrison’s vision of Zauriel will be maintained in this mini-series, as his writing partner Mark Millar is at the helm. Millar does a good job of bringing this heavenly/hellish epic down to earth by presenting Zauriel in a context we can relate to. In a flashback depicting his departure from Heaven, another angel notes what Zauriel is giving up by leaving the rather business-like hierarchy (basically, he leaves his job and future promotion for the love of a woman).

But the character we’re really meant to relate to and understand is Shannon, the woman Zauriel watched over From Above and fell in love with. Her life is far from perfect, but she copes and thrives in her little corner of the world. She is so incredibly easy to like, and one can’t help but understand Zauriel’s abandonment of his glorious post. The first half of this book (except for the JLA flashbacks) reads like a Vertigo book, and yes, that’s a compliment. It’s different and smart. There is a definitely shift in tone when Asmodel, Zauriel’s angelic arch-nemesis, meets with Neron. It’s at this point that the story embraces the super-hero genre. And no, that’s not a criticism, at least not in this case.

Olivetti is an interesting artist. I am more familiar with his painted work (THE LAST AVENGERS STORY), which is stunning. His pencil and ink stuff is lovely as well, but quite different from his painted art. It can be lovely and dirty and awesome and simple. At times, it is a bit too sketchy, but I expect that will not be a continuing problem.

You know, I get the impression that maybe the whole idea of an angel leaving his job for a lover is something Morrison might have intended as a separate, non-super-hero story. But he decided to integrate this idea into his JLA, and I, for one, am thoroughly pleased.