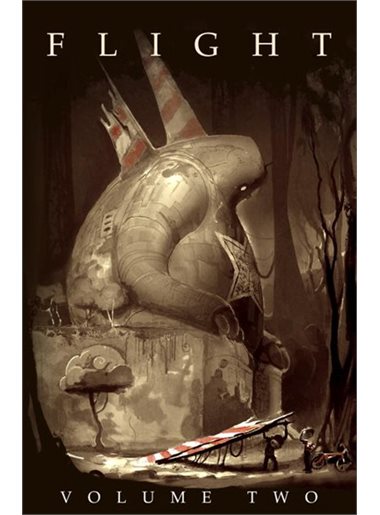 I passed on the first volume of this anthology book when it was originally released, and it didn’t take me long to realize that was a mistake. Reviews of the book seemed to be universally positive. I finally picked up Flight Volume One weeks later. When this second volume was solicited, I made damn sure I didn’t miss the boat again. I’m more than happy to jump on the Flight bandwagon. Though the book lacks any kind of coherent theme, it’s hardly a concern, because the creators — from well-known ones to the obscure — turn in work of such high quality. Most anthologies boast several strong pieces, some decent ones and some mediocre. The people behind Flight clearly have set a higher standard.

Though maturity and thoughtfulness shine through in much of the material in this volume, most of the stories boast a charming innocence. Doug TenNapel’s slightly surreal and twisted story of a tea party, for example, is hilarious, but it’s the simplicity of the main character’s motives constrasted against the more bizarre elements that from which the short story derives its strength. Though the mood shifts from story to story, there’s an overall playfulness to the book that’s rather soothing and welcome. Another recurring trait is a sense of the surreal, of a dream-like fluidity. Given that quality, Michael Gagne was the perfect choice to eopn the book. His cute yet organic style captures that weirdness perfectly but presents it in a most beautiful light.

There are darker segments as well, but sometimes, even they manage to be playful. Rodolphe Guenoden’s “The Ride” is one such piece. It’s full of energy, but it’s far more seductive than the more cartoony pieces elsewhere in the book.

There are several contributions from recognizable names in the industry here, from TenNapel to Jeff Smith, from Sonny Liew to Becky Cloonan. I have to admit that a good deal of the fun of this book was discovering new artists and the incredible strength of the work of so many unknowns. The professionalism of almost every effort here is thoroughly impressive, as is the diversity of subject matter, moods and styles. Animation is clearly an important influence for many of the creators here.

One of the segments that really struck me was a slice-of-life piece exploring an American visiting the East to get back in touch with his Indian roots. The Golden Temple by Neil Babra is the continuation of a story from Flight Volume One, but it stands up well on its own. Babra’s storytelling style — both in terms of art and writing — reminds me a great deal of Craig Thompson’s Blankets. Babra makes the cultural setting easy to understand; Westerners will be relate to the piece thanks to the strong characterization and dialogue.

Also worthy of note are the high production values of the book. The paper quality really allows the colors to pop. The coloring is textured and energetic; there’s no four-color simplicity to be found here. It’s a slick-looking volume, one of the best treatments of the anthology format I’ve seen in North American comics. The storytelling and the publication itself boast strong European and Asian influences throughout. 10/10